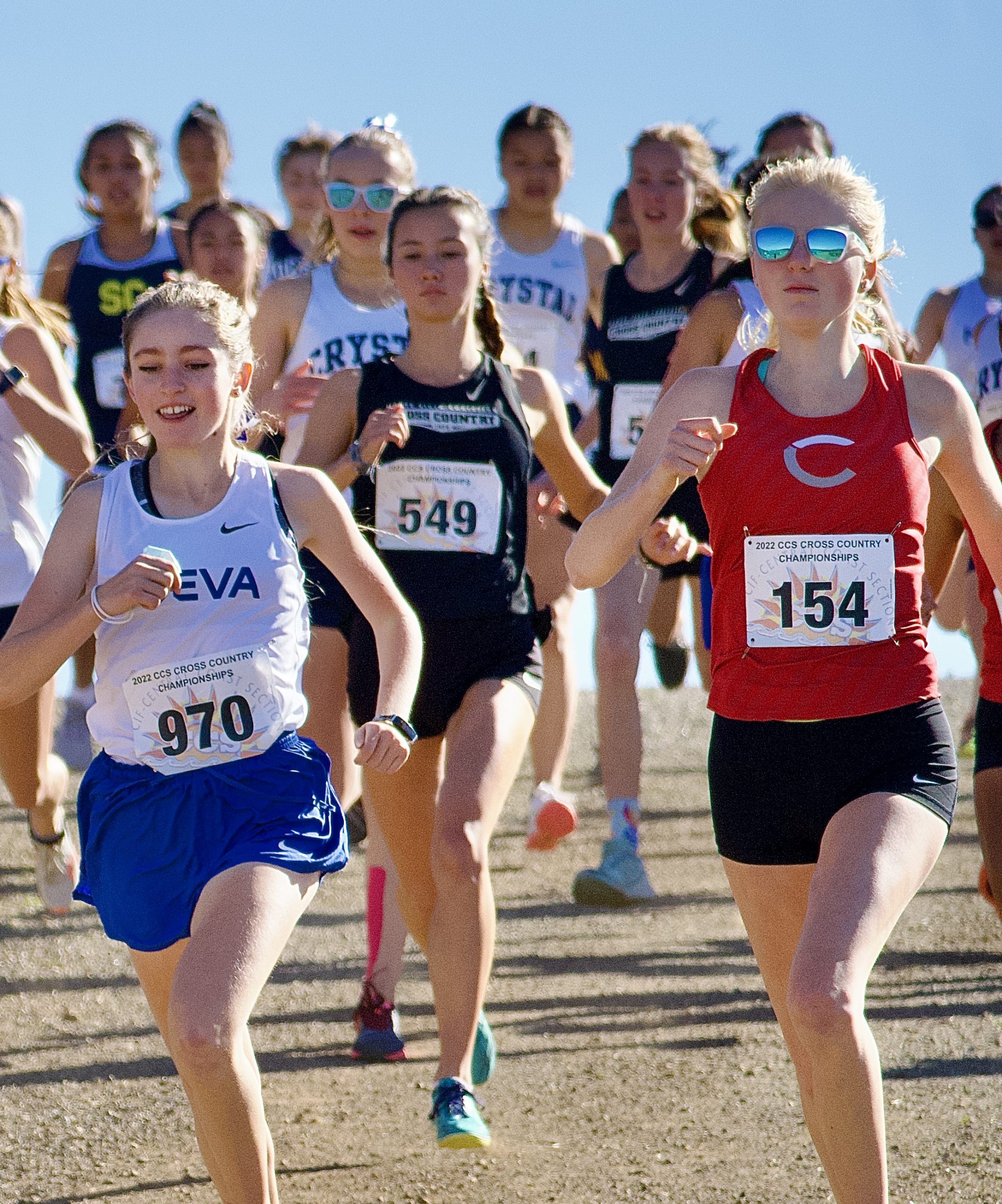 By: Ethan Robinson and Mateo Dichoso

The culmination of Monte Vista Christian’s cross country season took place on Saturday, November 12, at the notoriously difficult Crystal Springs course. The team met with a staggering 119 others across five divisions to compete for placement in the State Championship race. Representing Monte Vista was the boys varsity team, as well as Kylie Bruneli and Caelan Gilliam, who put on dominant performances during the PCAL League Finals at Palo Corona just two weeks prior. Because the girls were lacking the five runners necessary for a scoring team, the duo’s only hope of continuing their season was to place within the top 15 runners of this Division V race out of 71 competitors. As the leading pack emerged over the top of the first hill, it was clear that Bruneli and Gilliam were in the running for a state appearance. When the dust settled, the two emerged victorious, as Kiely crossed the finish line in 13th place with a time of 20:16, with Gilliam just once place behind her in 20:36. This marks the first time that an MVC girl’s varsity athlete has made state under coach Michael Lanham. Shortly after the girl’s incredible performance, the seven members of the boys varsity team took to the start line against fourteen other teams looking to qualify for state. Team captain James Ponzio reflected on his mentality just before the race:

The race started promptly just before noon, and by that time the searing climate of the course was in full effect, and the heat had taken its toll on the runners. In the boys race, one runner had his efforts at a state appearance dashed when he collapsed just 600 meters before the finish line. The Division 5 race was stacked with intense competition, including Menlo and Crystal Springs Uplands, which are both teams that make use of the course for their practice sessions. Despite the rugged hills, scorching temperatures, and fierce competition, the boys ran a race to be proud of. Ponzio came in 6th place with a time of 15:53, solidifying his spot in the state race. One of the most notable performances was freshman Gavin Beckman’s time of 17:40. The race was over for the Mustangs when freshman Eli Kieft crossed the finish line in just under 19 minutes, another incredible performance for such a young runner. As the points were tallied up, the MVC runners eagerly awaited their placements. Because the team ran so well, it was possible that they were in the top 3 teams to finish, which would qualify them for a team appearance at state. Although James Ponzio was the only runner on the boys team to qualify for state, the MVC team put on an admiral display of running, finishing 4th out of 14 teams. Instead of feeling defeated by this narrow miss, the mustangs celebrated their proximity to a state appearance. After the race, Ponzio gave a statement about his thoughts on the season:

“The team has done amazing. 4th in Division 5 was incredible. The team pulls it together when they need to, and they showed up at Crystal and really made an impression”

Even though only three MVC runners will advance to state, the team still plans on running together to stay in shape during the off season. As the regular season comes to an end, it’s evident that Monte Vista’s XC program is headed in a good direction, with plenty of young, talented athletes poised to perform well in the coming years.